Back to Breast Services

What is breast density?
Density measures the amount of fatty, glandular and fibrous tissue in the breast. A dense breast consists of more glandular and fibrous tissue than fat. It is not a measure of breast firmness; therefore, a mammogram is the only way to determine your density.  Dense tissue is relatively common and found in more than forty percent (40%) of women.

Why is breast density important?
The presence of dense tissue may make it more difficult to detect abnormalities in the breast and can be associated with an increased risk of breast cancer. Dense tissue appears white on a mammogram, which can obscure the presence of lumps (cancerous and noncancerous). Since lumps also appear white on a screening mammogram, supplemental imaging exams may be beneficial for women with dense breasts.

How do I find out if I have dense breasts?
A mammogram is used to identify breast density. The radiologist reading your mammogram will determine your density based on a four-level scale (A, B, C, D) approved by the American College of Radiology. The Breast Density Notification and Awareness Bill, approved by North Carolina legislation, requires all mammography providers to inform women of their breast density level as interpreted on their mammogram. This information will be included in the mammography report sent to you and your physician. Breast density is assessed each year and may vary based on radiologist interpretation, as well as naturally occurring changes in breast tissue.

A 4-level scale is used to categorize breast density: 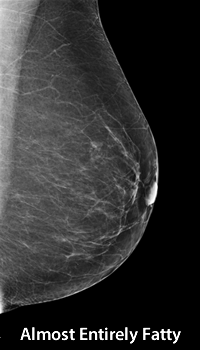 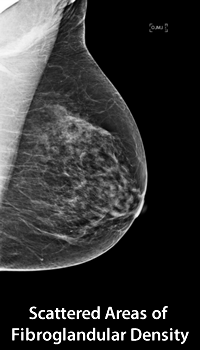 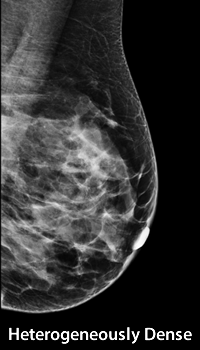 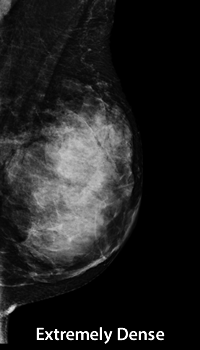